Diving Rubbish... only saw Hammerneads, whitetips, silkies, galapagos oh and a couple of whale sharks. The smaller whale shark at only ten metres was heavily pregnant.
A few other fish such as mantas, eagle and stingrays the odd turle or two dozen schools of jacks and tuna.
Off white water rafting tomorrow. Hope that´s a bit more exiting.

No, this isn’t a mistake, just a report which should have been written up some 12 months ago. I hope you will enjoy. 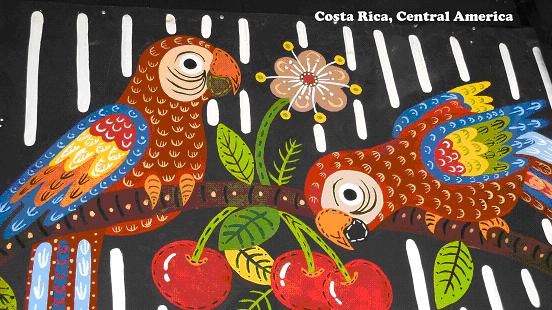 I recall many years back diving at The Brothers in the Red Sea with the likes of Chris Mort, Maria Harwood & Simon Rigby when out of nowhere nearing the end of our afternoon dive that I received a sharp tug on my B.C from my buddy. Turning around from looking away from the reef wall, in around 10 metres of water, I was stunned to see a Hammerhead shark cruising towards us. Its power and gracefulness held me in awe, for what seemed to be ages, but in reality was probably no more than 10 seconds before it veered off back into the ‘blue’.

It is moments like these which I shall never forget, I feel very privileged to have been at the right place, at the right time with a Club dive buddy to share the experience. I was literally hooked and wanted more!

Prior to the ‘The Island of Sharks’ being promoted on the likes of the National Geographic & Discovery Channels I read an article that if you wanted to see Hammerhead Sharks in their abundance, Cocos Island was the place to visit. Little did I know where the place was and how difficult is to reach, not to mention the cost! The feasibility in terms of time and expenditure meant I could only dream of visiting such a destination.

Roll on 10 years and a Mr Geoff Roberts enters the frame with an enviable ‘dive anywhere at any cost so long as there are Big creatures to see (the more dangerous the better)’ attitude!

Through his infectious enthusiasm, before we knew the dive trip was being organised in 2007 for a couple of years later. The party included Geoff (and his long-standing dive buddy Pete; me; Maria; Denis & Ivan.

To get to Cocos, we flew via Newark (N.Y) to San Jose (Costa Rica capital). For those unaccustomed to the vitality of the downtown Central & South America townships it can be a bit daunting, especially when you (Ivan) are allegedly threatened with having your throat cut …….. so half of the group split and returned back to the hotel. Undeterred, Maria, Pete & I stayed put, sampling the colour, food, music and architecture of the Costa Rica capital.

I was so overwhelmed with the place that I literally nearly came a cropper – yes, I was within inches of being run-over ……. the gasps from the locals with mouths wide open told the story. If not for Pete dragging me back from the on-coming car I would literally have ended up like a squashed banana. Following this episode, we decided to head back but took the longest bus journey imaginable ending up very lost. Still, at least we saw the city and remarkably arrived back at our digs before dusk.

Was the journey finished? No way, next was a coach journey down to the port of Puntarenas following which we still had another 36 hours to navigate across the Pacific! Thankfully the crossing was fairly calm and gave us opportunity to mix with the other guests and recuperate from the flights, death threat and San Jose infirmary!

On arrival at Cocos we were greeted by Frigate birds, it really was like a scene from ‘The Lost World’.

The boat was berthed in Chatham Bay at the N.E corner of the island from where all dives were carried off from RHIBS aka Panga 1 & Panga 2. 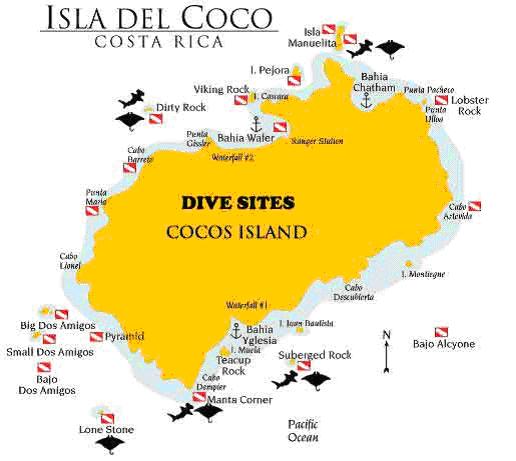 First dive was Monday 16th November at 08:00 with the water temperature was 27C – the check out dive went fine with White Tip reef sharks grabbing our attention.

2nd dive was at Manuelita at 11:00 where we saw Hammerhead Sharks, Eagle Rays, Turtles and the customary White Tips.

Sadly, Maria’s troublesome cough prevented her diving the next dive and in fact the next few days diving. A crying shame really because more Hammerheads at Punta Maria, Dirty Rock & Alcyone were seen along with a couple of Whale Sharks – one very close as you can see:

We also took a trip onto Cocos Island itself to learn about the conservation programme and policing of the waters to ward off the rogue fishermen who were decimating the shark numbers and killing turtles trapped within their illegal nets.

All in all we did 16 dives including a memorable night dive with White Tip Reef sharks literally passing between our fins.

Sadly, it was time to return back to the mainland, but at least we were escorted back by a pod of dolphins!


Back at Puntaranus
So, one week over but Geoff had many other activities in store.

You will note that Geoff isn’t in the picture, more often than not he was submerged under the raft!

We stayed at the Observatory Lodge, which so happened to be the closest accommodation one can get to the Arenal Volcano – this is Costa Rica’s most active volcano and did we hear it rumble!

The Lodge was set in picturesque surroundings, ideal if you are a lover of the tropical fauna and flora.

This involved zip wiring through the forest.

Sadly, all good things had to come to an end, but what an action-packed holiday in Costa Rica. Thanks Geoff and the rest of the gang for a most memorable experience ……. yes, it was well worth the wait and excellent value for money.

View all pictures from Cocos 2009
Top

Only took 14 months to get the trip report this time Ray - you obviously have too much free time on your hands!!
Top

Thanks Ian for taking the trouble loading the report onto the website, a great job done and better late than never eh Maria?
Top
Post Reply
4 posts • Page 1 of 1